While the dark and dreary days of September may be fading from our memories, the intermittent moderately hazy conditions this month continue to remind us the problem is far from over.

Against this backdrop, many expected Budget 2020 to include significant allocations for haze mitigation. And indeed, transboundary haze was one of two environmental issues (the other being the chemical incident in Sungai Kim Kim) given special attention by the Budget, with the Environment and Chemistry departments handed a total of RM30 million to tackle the problems.

It’s still unclear what chunk of the RM30 million is being assigned to haze mitigation, but the allocation underlines the fact that the haze has very real economic implications to both the Malaysian government and its citizens.

Accurately quantifying the economic losses ensuing from a particular episode of haze is complex, largely due to the difficulty in determining the parameters involved.

Where does one draw the line? Which dates should be considered? Which sectors should be included and excluded? How to determine if it was the haze, and not some other hidden variable, that was the direct cause of the spending?

As such, there have been only two major studies to quantify the economic losses to Malaysia and Malaysians arising from the haze; one for the 1997 episode and a smaller study (focusing on individual spending) for the 2013 event. Both studies were carried out by the same researchers from Universiti Putra Malaysia, using similar methodologies.

While we are still a long way from determining the losses incurred during this year’s haze episode, we can consider how previously identified economic areas may be affected this year, as well as look at several new areas which, as a result of recent developments, could prove crucial in calculating the cost of the 2019 haze. 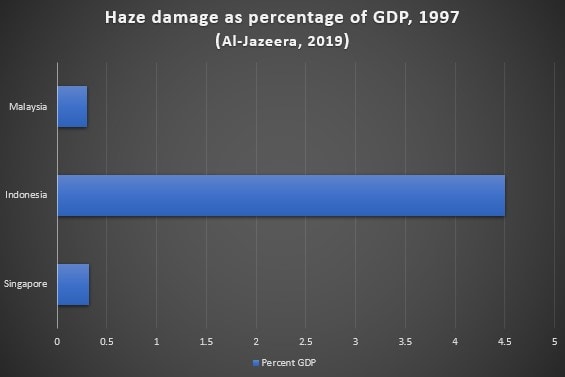 Government communication and the media have tended to focus on how the haze is harmful to health. And indeed, much of the quantifiable losses from haze are rooted in health effects.

Due to the somewhat unpredictable nature of haze events, many Malaysian don’t budget for haze. Therefore, spending on emergency clinic or hospital visits for treatment and hospitalisation, as well as pharmacy purchases of medications and masks are largely off-budget.

In 1997, these health costs added up to RM23 million, while in 2013, spending on health increased exponentially to RM410 million!

These costs are expected to continue to rise this year, especially with increased awareness on how to effectively protect oneself against haze. For example, the more expensive N95 masks (as opposed to the ineffective surgical masks) quickly sold out at many shops this year.

Despite their best efforts however, many people still fall sick due to the haze. And being sick takes a serious toll on the economy in another way: productivity.

Companies generally recorded more sick days during previous haze episodes. And that’s not all. Some parents stay home when their children fall sick, or when schools close. Meanwhile, those under casual employment may forego income opportunities due to sickness or to avoid exposure to the haze.

In 1997, all these factors accounted for RM393 million in lost productivity, while these same things resulted in a whopping RM958 million in losses in 2013. Evolving trends and norms have changed how Malaysians are exposed to haze risk. One such trend has been the rise of the gig economy, which has taken the country by storm in the past five years. Today, up to 26% of the Malaysian workforce are freelancers.

This means more Malaysians have the flexibility to work from anywhere. Those who are able to work from home may be able to protect themselves better from the ill effects of haze, moderating losses in this area.

However, not everyone can do this. The high amount of riders “gigging” for delivery companies like Grab, Foodpanda and Lalamove has drastically increased the numbers of motorcyclists exposed to haze. And as these riders are not considered full-time employees, they are ineligible for sick leave or medical benefits.

Ironically, some companies even use the haze as a marketing gimmick, encouraging people to get their food delivered instead of going out in the open!

There is also bound to be an increase in household utility-spending as people spend more time indoors during the smoggy season. Research in Singapore during the 2015 haze, for example, saw a significant rise in utility usage, as people tend to drink more water and run air purifiers for longer during these episodes. 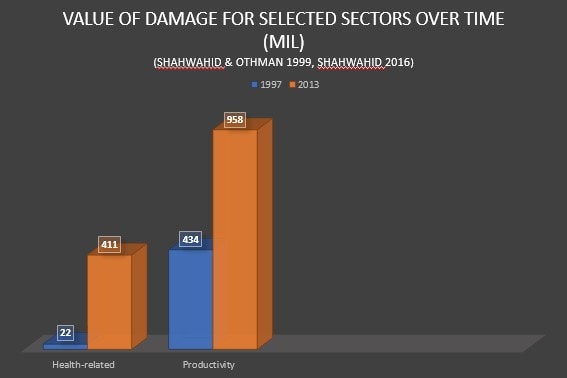 The worsening state of the economy and rising cost of living however, may have some unintended side effects this year. For example, the Malaysian Employers’ Federation reported many employees this year continued to work even when sick, while childcare centres were in high demand due to some parents being unable to stay home to care for their children.

Health concerns, together with visibility issues, have also taken a significant toll on tourism. With the regional haze making headlines worldwide, would-be visitors unimpressed at the thought of sightseeing in the thick, toxic air cancelled trips to Malaysia. Additionally, there were airport closures as well as flight delays and cancellations.

With tourism contributing almost 15% to Malaysia’s economy, this is a big deal. In 1997, tourism-related losses stood at RM319 million.

There is a unique long-term element to the losses in this sector as tourist numbers often fail to reach pre-haze levels even after the haze has dispersed. As the international community becomes more conscious of the issue, Malaysia’s appeal as a tourist destination is bound to decline.

In such dire times, the government also usually pumps in additional funding for immediate corrective measures like firefighting and cloud seeding. In 1997, this amounted to RM27 million additional government spending, which included the cost of sending firefighters to Indonesia.

While Indonesia refused foreign assistance this year, the numbers can still quickly add up. Each session of cloud seeding, for example, costs RM80,000. Additionally, money was also spent on sending half a million (surgical, not N95!) face masks to Sarawak.

Considering all these, the allocation for haze mitigation in this year’s Budget seems hardly enough. What is also unclear is whether the allocation is for corrective measures, or to be used for prevention instead. In 1997, total losses from the haze were estimated at RM802 million. And even though the 2013 haze was not as severe, estimated total losses were almost double at RM1.5 billion, due in part to an increase in population as well as inflation.

With the 2019 haze surpassing the severity of the 2013 event, expect a further increase in losses this time.

The haze has been linked to the lucrative palm oil industry, which generated around RM67.5 billion in export earnings for Malaysia last year. Compared to that, losses of a few billion may not seem like much.

However, one must pause to consider if the profits reaped from this sector are worth the suffering of everyday Malaysians as well as the losses incurred in the various other sectors of the Malaysian economy.

The government collects cess, taxes, and levies from large plantation industry players. Considering the profits gained by these companies, the government should consider increasing these charges and channeling a good portion of them towards haze mitigation.

A higher Budget allocation will also allow for more effective long-term preventive measures because the fact is, much more than a cut of RM30 million is needed to permanently solve this problem that is costing the country billions.

She completed her PhD on land use change in relation to the palm oil sector at the Department of Government and International Relations, University of Sydney in 2012. Her PhD monograph was published as a book entitled “The Haze Problem in Southeast Asia: Palm Oil and Patronage” under the Routledge Malaysian Studies Series in 2016.

Her writings have appeared in both academic journals and popular media like CNN Opinion, The Conversation, and Malaysian Insider.